Mikel Arteta urged Arsenal to be more ruthless after they crashed to a second successive Premier League defeat as Ollie Watkins’ early goal fired Aston Villa to a 1-0 win on Saturday.

Arteta’s side fell behind after just 74 seconds at Villa Park and were unable to muster a convincing response.

Arsenal lost at Wolves on Tuesday and have gone three league games without a victory.

The Gunners are languishing in 10th place, nine points adrift of the top four as their faint hopes of Champions League qualification look less realistic by the day.

“Really strong performance. We completely dominated the game, we dominated every department, and we should have won,” Arteta said.

“But in the Premier League when you give a goal to the opponent – and we gave them another three opportunities to be fair, just giving them to them – and then you are not ruthless in the opponent’s box, you don’t win games.

“That is something we have to do better, and it cost us two games in the last few days because the reality is we should have won both games. It’s a big blow.”

When Arsenal faced Villa in November, they suffered a lacklustre 3-0 defeat that sent them sliding towards the relegation zone.

Although Arsenal had managed to claw their way back up the table, eighth-placed Villa once again revealed the flaws that plague Arteta’s men.

Arsenal, badly lacking a cutting edge, have scored just once in their last three matches and retain a fatal inability to stay focused at the back.

Villa took the lead with their earliest Premier League goal since 2014, aided by some woeful defending from the Gunners.

Arsenal’s Cedric Soares gave the ball away and Bertrand Traore crossed to the unmarked Watkins, whose shot went in via a deflection off Rob Holding.

Former Arsenal keeper Emiliano Martinez made a superb save to keep Villa ahead when he tipped over Granit Xhaka’s free-kick, with Holding headed just wide from the resulting corner.

With Bernd Leno suspended, Mat Ryan was making his first appearance in goal for Arsenal after joining on loan from Brighton.

Villa had won 10 of the 11 league games in which they had scored the first goal this season.

They were back on top at the start of the second half and John McGinn’s blast was saved by Ryan.

Barkley fired just over after a fine run from Jack Grealish opened up the Arsenal defence.

Back in the squad for the second successive game after his mother’s illness, Arsenal captain Pierre-Emerick Aubameyang came off the bench with 30 minutes left.

The Gabon forward was unable to convert Nicolas Pepe’s cross as Martinez beat him to it with an out-stretched hand.

Pepe was Arsenal’s lone bright spark and the Ivorian’s low strike forced Martinez to save with his feet.

Arsenal’s Martin Odegaard, on as a substitute, wasted a late chance to equalise. The on-loan Real Madrid midfielder smashed over from the edge of the area. 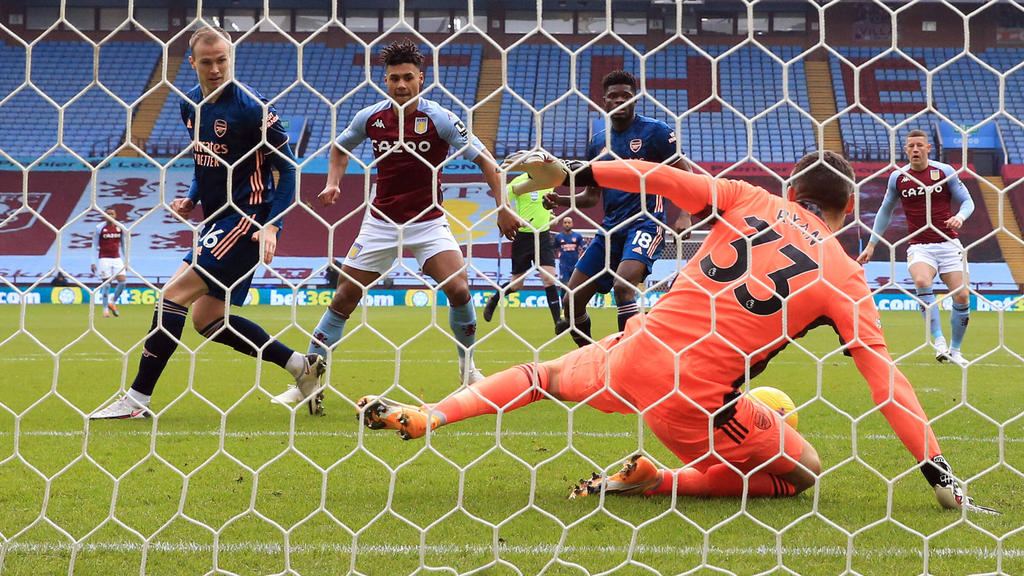